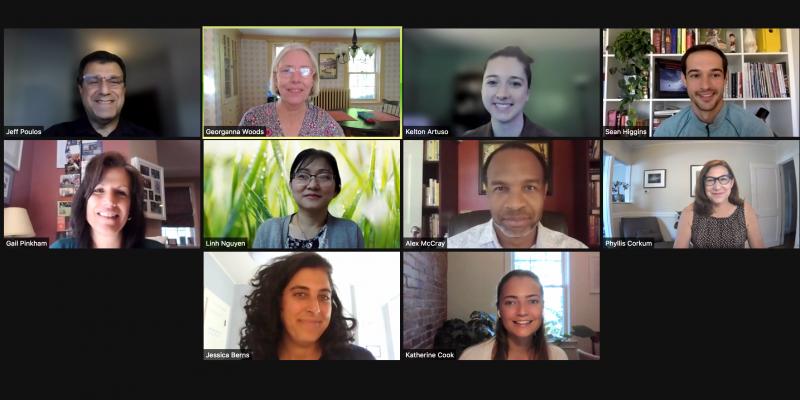 Chief Executive Officer
Jeff joined Philanthropy MA as Executive Director in mid-2010 and was named Chief Executive Officer in 2016. Jeff currently serves on the board of the United Philanthropy Forum and served as board chair from 2017-2019. He served on the board of the Massachusetts Nonprofit Network for 7 years, four as Treasurer, and was named in 2018 as an Emeritus board member. In addition, Jeff was a member of the Leadership Team of the national D5 Coalition on Diversity, Equity and Inclusion in Philanthropy. Prior to Philanthropy MA, Jeff served as Executive Director of StageSource, the Greater Boston Theatre Alliance, worked at the Huntington Theatre Company in a number of positions, and was General Manager at the New Repertory Theatre. Additionally, Jeff has served as Chair of the Arts Services Coalition of Boston, as Board Treasurer of Massachusetts Advocates for Arts Sciences and Humanities (precursor to MassCreative), and as a member of The Boston Foundation Arts and Culture Advisory Committee and the Massachusetts Cultural Council's Advisor Corps. In 2007, Jeff was one of 56 arts leaders to attend the Executive Program for Nonprofit Leadership-Arts at Stanford University Graduate School of Business Center for Social Innovation. In 2011, Jeff was awarded the StageSource Theatre Hero Award for his long-time service to the Greater Boston theatre community.

Associate Director of Programs
Kelton joined Philanthropy MA in September 2017. In just six months Kelton proved to be a great asset to Philanthropy MA and moved into her role as Programs and Services Manager. In this position, Kelton played a key role in delivering and supporting services, and stewardship relationship with Philanthropy MA’s Grantmaking Members and Nonprofit Partners. As Associate Director of Programs, Kelton will lead programming from design to implementation for Member, Network, and Nonprofit Partner Programs as well on Special Initiatives. Kelton completed her MBA in Public & Nonprofit Management at Boston University’s Questrom School of Business where she was able to consult with the Wenham Museum, the Skate for the 22 Foundation, and Celebrity Series of Boston. Prior to Business School, Kelton held Visitor Services roles at the Wenham Museum and the Discovery Museums. She received her BA from Mount Holyoke College.

Network Vibrancy Director
Jessica joined Philanthropy MA in January 2019 in a newly created role as Network Vibrancy Director. This position leads the effort to cultivate, convene, and support funder groups (foundations, donors, other giving networks) in Massachusetts. In this role, Jessica fosters stronger collaboration and knowledge sharing among philanthropic organizations and individuals in the region. She connects philanthropy with government, nonprofit organizations, and the business community.  In 2011 Jessica founded her own consulting practice where she engaged with non-governmental organizations, university-based programs, and philanthropy, focused on global peace and security initiatives, citizen movements for good governance, and women’s leadership. Prior to founding her consulting practice, Jessica served as Program Director at Coexistence International at Brandeis University and Program Officer for the Americas Department of Transparency International. Jessica currently serves as a Board Member of Re-Imagining Community, Art & Social Transformation (ReCAST) and serves on the Membership Committee of New England International Donors. Jessica holds a Master of Arts in Law and Diplomacy from the Fletcher School at Tufts University and a Bachelor of Arts in Spanish from the University of Michigan. She is fluent in Spanish and proficient in German.

Programs and Services Associate
Johanna joined Philanthropy Massachusetts as the Programs and Services Associate in September 2022. In 2022, Johanna completed a year of service as an AmeriCorps VISTA in SUNY Buffalo State’s Community Engagement Office and West Side Promise Neighborhood Coalition, where she worked on food security and economic development programming in Buffalo. She graduated from Colgate University with a double major in Political Science and Environmental Studies. She held many internships throughout college at non-profit organizations addressing food security and refugee services. In her spare time, Johanna enjoys hiking, crocheting, and baking

Associate Manager of Operations and Member Engagement
Katherine joined Philanthropy MA as the Programs and Administrative Associate in January 2020 and moved into the role of Associate Manager of Operations and Member Engagement in April 2022. She graduated from Connecticut College with majors in English and American Studies. Katherine has had internships at various arts-related institutions, including an editorial and marketing internship at Art New England Magazine in Boston, MA, an internship in the education department at the Lyman Allyn Art Museum in New London, CT, and a production internship with a local children’s theater in her hometown of Brookline, MA. At Connecticut College, she sang for four years in its first all-female a cappella group. In addition to her interest in the arts, Katherine has enjoyed working with youth of all ages, including tutoring in Brookline’s Literacy Partnership Program and working as a camp counselor at Brookline’s recreational summer camp.

Nonprofit Programs Manager
Phyllis joined Philanthropy MA as the Programs and Services Coordinator in January 2021 and was promoted into the role of Nonprofit Programs Manager in April 2022.  She is an educator and nonprofit manager experienced at building the capacity of caring institutions. Phyllis launched her career in the literacy field, directing a mobile adult education program initiated by the Pew Charitable Trusts in Chester, Pennsylvania. There she moved into the roles of director of fund distribution and then fund development for the local United Way, where she also managed the county FEMA board and founded the Homeless Services Coalition. Phyllis later served as the director of the annual fund for Outward Bound National, headquartered in the Hudson River Valley. After moving to Florida in 1998, she earned teaching certifications in Montessori and parent education. She taught for 10 years before returning to nonprofit service at her family’s beloved Winter Park Public Library, where she served as the development director. She secured the lead grant for a new library facility for the City of Winter Park and later managed that grant when she was hired by the Edyth Bush Charitable Foundation, a philanthropic leader in Central Florida. She served as the Grants Manager for the foundation for a few years before returning to the Northeast with her husband.

Summer Fund Director
Sean Higgins joined Philanthropy MA as the Summer Fund Program Manager in October 2017 and brought with him a fresh perspective on youth development programs in and around Boston. Since then, Sean has supported the allocation of over $4 million in grants to youth-serving organizations in Greater Boston. In March of 2022, Sean was named the Director of the Summer Fund. Before his time at Philanthropy MA, Sean served as a Policy Associate to Mayor Jorge Elorza of Providence, Rhode Island, focusing on education, workforce development and housing. In his time with the City of Providence, Sean provided strategic guidance for Mayor Elorza’s $1 million investment in summer youth job opportunities and managed partnerships with 19 organizations throughout the City. Before joining the Elorza Administration, Sean supported program operations for Providence Talks, an early childhood education initiative funded through Bloomberg Philanthropies’ Mayors Challenge.  In his spare time, Sean enjoys exploring Boston’s many unique neighborhoods and staying active by boxing and playing softball. Sean holds a dual undergraduate degree in Political Science and Legal Studies from the University of Massachusetts, Amherst and a Master’s in Public Administration from the University of Massachusetts, Boston.

Vice President, Member Engagement and Strategic Initiatives
Alex joined Philanthropy Massachusetts as the Senior Director of Programs Summer 2017 and assumed the role of Vice President, Member Engagement and Strategic Initiatives in June 2022. With a career in the social sector that spans more than 25 years, prior to Philanthropy MA Alex McCray served in resource development capacities at several United Ways. Before working within that network, Alex was a Senior Associate at Nonprofit Finance Fund (NFF), helping to strengthen nonprofits and enabling social sector leaders to make sound strategic decisions. In addition to engaging in resource development and consulting, Alex has held leadership roles within youth, workforce development and arts-focused nonprofits. For four years Alex gained a funder's perspective as a Program Staff member at The Rhode Island Foundation. Alex values his contributions as a Board Member of the Massachusetts Nonprofit Network (MNN), and Project STEP, a local nonprofit organization which seeks to racially diversify the classical music profession. Additionally, Alex serves as a Big Brother through Big Brothers Big Sisters of MA Bay. In 2012 Alex received his M.S. Nonprofit Management from Northeastern University’s College of Professional Studies, where he taught graduate classes in leadership for five years. Alex was awarded his B.A. in Economics and minor in Dance from Bowdoin College.

Linh comes to us having most recently served as Accounting Manager at Geneva Furniture Group & Quitri LLC, as a Senior Accountant at Casa Myra Vazquez, and as a Contract Accountant for Community Economic Development Assistance Corporation. Prior she served in a number of accountant roles in Vietnam.

Senior Director of Communications
Since joining Philanthropy MA in 2002, Gail has been responsible for the communications and branding in her position as Senior Director of Communications.  Her work includes creating Philanthropy MA’s marketing collateral such as the Annual Report and Member and Nonprofit Partner collateral, design and content updates of the Philanthropy MA website, production of the Members newsletter and promotion of Philanthropy MA programs and events via social media outlets.  Before entering the nonprofit field, Gail had over 10 years of experience in the corporate sector with Hill, Holliday Exhibition Services as Director of Marketing for conferences for Primary Medicine Today, American Institute of Architects and the National Association of Realtors, Deltek Systems as Director of Strategic Marketing and Director of B2B Marketing at experience.com. Gail serves on the committee of Boston Women Communicators, Bridges Together, and Friends of the Burlington Dog Park and is a board member of the Christopher Catanese Children's Foundation and the New England Patients' Right Group. She holds a bachelor’s degree in marketing from the Carroll School of Management at Boston College.