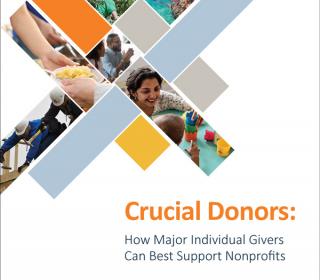 Individual donors are the largest source of philanthropic support for nonprofits, and as giving among small- and medium-gift donors declines, major donors are becoming even more important. To be most helpful to nonprofits, major donors should consider what these organizations and their leaders most need.

In this program, we’ll share nonprofit leaders’ perspectives on what they most need from major donors in terms of relationships, understanding, and types of support.

To frame the conversation, Ellie Buteau, Vice President of Research at the Center for Effective Philanthropy (CEP), and Hannah Martin, Associate Manager of Research at the CEP, will share findings from CEP’s latest research report, Crucial Donors: How Major Individual Givers Can Best Support Nonprofits. We will also hear from an individual giver and wealth management advisor about how they approach nonprofit giving and their reactions to the research findings.

What will you learn?

Karen Keating Ansara, The Ansara Family Fund. founded and chairs the Board of New England International Donors, a learning and giving hub for global philanthropists and grantmakers.  A member of Women Moving Millions, Karen and her husband Jim make grants to end global poverty (its causes and effects) in Haiti, but also on Boston’s North Shore. Karen serves on the Leadership Council of Oxfam America; on the Boards of Build Health International, the Haiti Development Institute, MCE Social Capital, and the Millennium Campus Network; and on the Advisory Boards of the Irish International Immigrant Center and the Pardee School for Global Studies at Boston University. She and Jim have four young adult children and live in Essex, MA.

Aixa Beauchamp has worked in the field of philanthropy for more than 25 years in the United States, Europe, and Latin America, helping institutions to strengthen their programs and broaden their impact in communities by crafting and managing programs that cut across many sectors. She began her career in the philanthropic sector as a program officer at the NY Community Trust. As a consultant for the Association of Community Trusts in London, she facilitated dialogue to advance funder relations in diverse communities. Past projects have included working with the Rockefeller Foundation and Hispanics in Philanthropy to promote philanthropy in Latin America and Latino communities in the United States, and to maximize donor and institutional management resources. Groups such as Rockefeller Foundation, Puerto Rico Community Foundation, Barr Foundation, Princeton Seminary and Hispanic Federation have benefited from her involvement. Aixa serves on the Boards of numerous organizations focused on philanthropy and Latino children, youth and families. She is the co-chair of the Massachusetts United for Puerto Rico Fund, dedicated to grassroots relief and recovery efforts in Puerto Rico after Hurricane Maria. Aixa is also co-founder of the Latino Legacy Fund. The Fund is a unique partnership among local Latino philanthropists and leaders, the Boston Foundation, and Hispanics in Philanthropy to establish the first Latino-focused fund in the Greater Boston area.

Aixa has received numerous awards in the philanthropic, community and leadership arenas. She was chosen as one of the 100 Most Influential People in Boston by Boston Magazine. Additionally, she has been featured in the Financial Times Wealth and Inside Philanthropy publications, and has written articles on Latino philanthropy for Spanish media. She holds a Masters in Public Administration from the Harvard John F. Kennedy School of Government.

Ellie Buteau, PhD, Vice President, Research, oversees the design, execution, and writing of CEP’s research and manages the organization’s research team. She is a leading authority on foundation strategy, foundation performance assessment, and foundation-grantee relationships and an expert in research design and statistical analysis. She has authored or co-authored numerous reports, articles, opinion pieces, and blog posts on issues related to foundation effectiveness – including Working Well With Grantees: A Guide for Foundation Program Staff and How Far Have We Come? Foundation CEOs on Progress and Impact. Ellie frequently speaks about CEP’s research at national and international conferences and was one of 12 nonprofit leaders selected nationally as a 2012 Independent Sector American Express NGen Fellow. Ellie is also a Certified Professional Coach (CPC). She has coached professionals in the United States, Canada, and China. She is a graduate of the International Coach Academy, and credentialed by the International Coach Federation as an Associate Certified Coach. Before joining CEP in 2004, Ellie led the design and analysis of education and health-related research projects at Cornell University, Tufts University, and a variety of nonprofit organizations. She taught courses on statistics at Tufts University and published research in a number of journals. She received a PhD in Social-Personality Psychology from City University of New York Graduate Center and a BA in Psychology, awarded with Great Distinction, from McGill University in Montreal. Ellie is an avid consumer of pop culture, a fan of dance in particular, and has practiced yoga for many years.

Hannah Martin, Associate Manager, supports the research team at CEP in designing studies, analyzing quantitative and qualitative data, and writing reports. Prior to joining CEP in June 2018, Hannah received her Master of Public Affairs from Indiana University, with concentrations in nonprofit management and policy analysis. While at IU, Hannah was a research assistant for the Indiana Nonprofits Project, where she helped administer a comprehensive survey of Indiana nonprofits, analyzed data, and wrote reports about the scope and dimensions of the Indiana nonprofit sector. In her free time, Hannah enjoys being outdoors, reading, and befriending animals.

Joel Mittelman is a Vice President at Fiduciary Trust Company, responsible for investment and relationship management for High Net Worth and Nonprofit clients. Before joining the firm, Joel was an institutional portfolio manager at The Boston Company for 8 years, and has additional experiences at Fidelity, Wellington Management, McKinsey & Co, and Deloitte & Touche. Joel is a member of the Council on Foundations, Philanthropy Massachusetts, CFA Society Boston, and the CFA Institute.  A resident of Andover, Joel volunteers his time as part of the Temple Emanuel Executive Board and the Lawrence General Hospital Development Committee, and was formerly a board member, coach, and proud parent within Little League. Growing up in Manchester, NH, Joel earned a BS in Business Administration from the University of New Hampshire and an MBA with distinction from Carnegie Mellon University.

No Solicitations: Philanthropy MA values knowledge sharing – connecting people with each other and with information. We strive to create a welcoming, collegial atmosphere at all of our events. We kindly ask program participants to refrain from soliciting other participants for business or grants while at events hosted by us, regardless of venue.

Accessibility: To inquire about accessibility of our programs, please email info@philanthropyma.org.

Media: Photographs and/or video may be taken at this event to support Philanthropy MA's efforts to educate and inform the community on the role of philanthropy, in marketing materials, on our website and through social media. If you prefer your image not to be used please notify us at the event. Thank you.