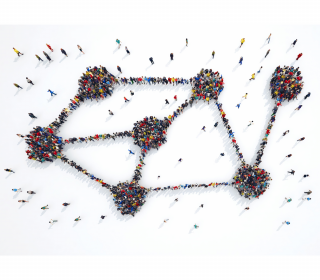 *Please note this year’s event is our first-ever hybrid one. There is different pricing for in-person ($85) and virtual ($60) participation and you will be given the option to choose upon registering. We hope to see as many of you in person as possible! For guests joining us in person, there will be a light breakfast and lunch provided.

As practitioners in philanthropy, we are inherently connected. We are tied together by a shared love of humanity, a desire to contribute to lasting positive change, and by our common experience of what is happening in the world around us.

The past three years have presented challenge after challenge, highlighting the divisions and disparities that have long been prevalent within our society. With long-standing structural racism, inequities in health and education and beyond, attacks on women’s health, food insecurity, assaults on democracy, worsening climate change, global wars impacting us here at home, and a deep political polarization, there is clearly no shortage of issues to address.

At the same time, philanthropy in Massachusetts has risen to meet the needs in communities across the state, through support for direct services to capacity building, to research and advocacy. The sector has sought to understand and address root causes, learn from communities and nonprofit partners, and identify opportunities for collaborative action. We have made new connections and strengthened existing ones, across identities, issues, and regions, playing a major role in our effectiveness and impact.

At this year’s annual meeting, we will explore our connections and the ways they strengthen individual and collective contributions toward positive change that endures. Come with an eagerness to learn. Leave with inspiration and actionable ideas in our move towards a more just and equitable society.

Dr. Carmen Rojas (she/her) is the president and CEO of the Marguerite Casey Foundation. Prior to joining Marguerite Casey Foundation, Dr. Carmen Rojas was the co-founder and former CEO of The Workers Lab, an innovation lab that invests in entrepreneurs, community organizers, and government leaders to create replicable and revenue-generating solutions that improve conditions for low-wage workers. For more than 20 years, Carmen has worked with foundations, financial institutions, and nonprofits to improve the lives of working people across the United States.

Prior to building The Workers Lab, Carmen was the Acting Director of Collective Impact at Living Cities. She supported 22 of the largest foundations and financial institutions in the world in order to improve economic opportunities for low-income people--supporting projects in the fields of economic and workforce development, energy efficiency, and asset building. From 2008 to 2011, Carmen was the Director of Strategic Programs at the Mitchell Kapor Foundation, where she oversaw the foundation’s Green Access and Civic Engagement programs. Alongside her work at the foundation, Carmen also taught in the Department of City and Regional Planning at the University of California, Berkeley. Prior to this, Carmen was the Coordinator of the San Francisco Redevelopment Agency’s Task Force on African American Out-Migration to address African American displacement from the city.

Janine Lee is the President and CEO of Philanthropy Southeast, the premier philanthropic network for courageous leaders, ideas and resources focused on the American South and U.S. Caribbean territories. During a career in philanthropy spanning more than 30 years, Janine has served in leadership roles at The Arthur M. Blank Family Foundation, where she worked as vice president of education programs, and the Ewing Marion Kauffman Foundation, where she was vice president of community building and philanthropy.

Janine serves on the Board of Directors of Independent Sector and on the United Philanthropy Forum's Racial Equity Committee, as well as its Racial Equity Capacity Assessment Subcommittee. Her previous board service includes the United Philanthropy Forum (formerly the Forum of Regional Associations of Grantmakers), the National Center for Family Philanthropy and the Mayor's Advisory Board on Homelessness in Atlanta. She also serves on the Advisory Committee of Third Sector Capital Partners, the Advisory Committee for ABFE’s 50th Anniversary Campaign, the Steering Committee of the Georgia Grantmakers Alliance (GGA), the Advisory Committee for the Foundation Center in Atlanta, and the Steering Committee guiding the Bechtel Foundation's research into resiliency. She is a co-founder and former chair of Grantmakers for Effective Organizations (GEO). She has presented at various conferences, including those held by Independent Sector and the Council on Foundations. In 2015, she was named one of America’s Top 20 Women in Philanthropy and Civic Engagement by Michael Chatman, one of America’s leading advocates for philanthropy on social media. In 2017, she was named an Arthur Vining Davis Foundations Aspen Fellow.

Lauren Smith, MD, MPH, is the chief health equity and strategy officer for the CDC Foundation, bringing more than 25 years working at the intersection of health care delivery and management, public policy and public health fields. As chief health equity and strategy officer, Smith partners with the CDC Foundation’s other senior leaders to develop and drive strategic efforts to embed health equity across the Foundation’s entire portfolio of work, including most recently, COVID-19 response activities with an explicit focus on addressing systemic racism and its impact on vulnerable populations’ resiliency amidst the pandemic.

Smith joined the Foundation from FSG, a social impact consulting firm, where she served as co-CEO and led the firm’s U.S. health practice, partnering with community, social sector, public sector, health care, public health and philanthropy leaders. Her previous leadership roles have included serving as the medical director and then interim commissioner for the Massachusetts Department of Public Health, the senior strategic advisor for a national innovation and improvement network focused on reducing infant mortality and the medical director of the pediatric inpatient service at Boston Medical Center. She also held federal and state government roles as a policy analyst in the Office of Inspector General for the U.S. Department of Health and Human Services and as a W.T. Grant Health Policy Fellow in the office of the Massachusetts Speaker of the House.

Rhonda Anderson is Iñupiaq - Athabascan from Alaska. Her Native enrollment village is Kaktovik. Her life work most importantly is as a Mother, as well as a classically trained Herbalist, Silversmith, and activist. She works as an educator within area schools and the 5 colleges near her home in Massachusetts. Rhonda has sat on several Indigenous panels and roundtables to discuss how to implement the Hyde Amendment within all IHS institutions across the United States, how to better educate Native students in Massachusetts, issues regarding Native teen drug and alcohol use, land acknowledgments, land back movement, Murdered and Missing Indigenous Women, and reproductive rights. Her activism ranges from removal of mascots, Water Protector, Indigenous identity, and protecting her traditional homelands in the Arctic National Wildlife Refuge from extractive industry.

“Vital. Vibrant. Visible: Indigenous Identity Through Portraiture” is an ongoing collection and exhibit of portraits of native peoples of New England, curated by Rhonda, to bring awareness to contemporary Indigenous identity.

Rhonda is Western Massachusetts Commissioner on Indian Affairs, founder and Co-Director of the Ohketeau Cultural Center and the Native Youth Empowerment Foundation, and a member of the Advisory Council for the New England Foundation for the Arts.

Phil Buchanan, president of CEP, is a passionate advocate for the importance of philanthropy and the nonprofit sector. He shares CEP’s belief that effective donors, working collaboratively and thoughtfully, can profoundly contribute to creating a better and more just world. Hired in 2001 as the organization’s first chief executive, Phil has led the growth of CEP into the leading provider of data and insight on philanthropic effectiveness.

Phil is author of Giving Done Right: Effective Philanthropy and Making Every Dollar Count, published in 2019 by PublicAffairs and named the “Best Philanthropy Book of the Year” by Inside Philanthropy. He is co-host of a podcast, also called Giving Done Right, with CEP’s Grace Nicolette, a frequent blogger for the CEP Blog, and author of op eds that have appeared in publications such as The Financial Times and The Boston Globe.

Phil is co-founder of YouthTruth, an initiative of CEP’s designed to harness student perceptions to help educators and funders accelerate improvements in K–12 schools and classrooms. Phil serves on the boards of directors of Philanthropy Massachusetts and the National Council on Aging, where he chairs the Governance Committee.

Porsha Olayiwola is a native of Chicago who writes, lives and loves in Boston. Olayiwola is a writer, performer, educator and curator who uses afro-futurism and surrealism to examine historical and current issues in the Black, woman, and queer diasporas. She is an Individual World Poetry Slam Champion and the founder of the Roxbury Poetry Festival. Olayiwola is Brown University's 2019 Heimark Artist -In -Residence as well as the 2021 Artist-in-Residence at the Isabella Stewart Gardner Museum. She is a 2020 poet laureate fellow with the Academy of American poets. Olayiwola earned her MFA in poetry from Emerson College and is the author of i shimmer sometimes, too. Olayiwola is the current poet laureate for the city of Boston. Her work can be found in or forthcoming from with TriQuarterly Magazine, Black Warrior Review, The Boston Globe, Essence Magazine, Redivider, The Academy of American Poets, Netflix, Wildness Press, The Museum of Fine Arts and elsewhere.

Zee Clarke is a Harvard MBA that went from leading teams at fortune 500 companies and startups in Silicon Valley to teaching mindfulness and breathwork to people of color.

After experiencing a number of race related challenges, from racial profiling and harassment by the police to microaggressions in the workplace, she realized that mindfulness and breathwork were much more powerful outside of the yoga studio and in the context of our everyday lives.

Trained in India, Zee leverages her toolkit of yoga, meditation, breathwork, sound healing, and Reiki, to ensure that all people of color have the tools to thrive despite any challenges that race, gender, or sexuality might present.